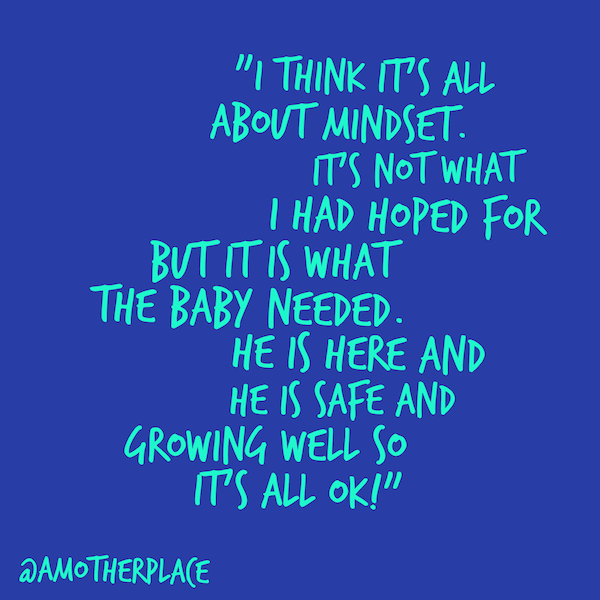 We think it is important to learn about the possible emergencies that can happen during labour. We hope you will not feel frightened by reading about them- they are not common occurrences but staff are trained to deal with all of them so do not worry.

Fetal distress is when there is an abnormality in the baby’s heart rate that is often associated with the passage of meconium (poo).  The normal fetal heart rate is 110 – 160 beats per minute but can vary from minute to minute even accelerating from time to time in healthy babies. When the baby heart rate is higher or lower than this range or when there are decelerations there may be cause for concern.

The biggest cause for concern is that baby may be getting short of oxygen, but serious problems like this occur very rarely.

There are several reasons why the baby’s heart rate may change.

Fetal distress will be picked up either by regular monitoring of the fetal heart or if you have continuous monitoring by CTG.

Usually things improve if you are turned on your side and given extra fluids intravenously to correct the drop in blood pressure.

If the irregularity continues then an Obstetrician will be called to assess your progress in labour.  Sometimes a fetal blood test to check oxygen levels is done by taking a blood sample from the baby’s scalp.  If labour is not progressing quickly and the fetal heart remains abnormal then you may need an emergency Caesarean Section.

If however, the neck of your womb is fully open you may be encouraged to push but may need some assistance with forceps or a Ventouse for a safe delivery.

If there are concerns about baby’s welfare, a paediatrician will be present for the delivery.

Please note, the presence of Mecconium by itself is not serious.  In fact, as you get past your due date, up to 1 in 3 babies may pass mecconium during labour without there being fetal distress.  However, if your waters break and are green or brown you should make sure you tell your midwife or doctor.

On admission to hospital, one of most imp observations of the mother is her blood pressure.  It is taken in standard way and you would hope it is less than 140/90.  Blood pressure can vary during labour and this can affect health of the baby and mother.

A rise in blood pressure during labour may occur because of the development or progression of Pre Eclampsia, it can even occur for the first time during labour.  If readings are high this can be dangerous for the mother particularly if she is hoping to push the baby out.  A sudden rise may require drugs to bring it down and careful management of the pushing stage of labour, perhaps with the use of forceps or Ventouse.

In First Stage of Labour

Slow progress in labour is quite common especially in first time mothers.  Once labour is established and you are in the active phase, one would expect you to progress at approximately 1cm per hour.  If labour is particularly slow it may be that the baby is in an unfavourable position, such as Occipto Posterior (back-to-back) or Occipito Lateral (side-ways).  It may also be because contractions are not efficient.  The strength and duration of contractions can usually be improved by two methods; the first is the artificial rupture of membranes to release amniotic fluid- this releases natural hormones which may correct problem.  If after 2 hrs this has not improved the situation then the second method is the use of Oxytocin (Syntocinin) given through an intravenous drip.  This usually improves the strength and frequency of contractions but requires careful monitoring of the mother and baby so as not to over-stimulate the uterus.

This intervention needs to be supervised by an Obstetrician and you will have regular internal examinations to monitor your progress.

Sometimes failure to progress can occur simply because baby is too big for pelvis either by size or, more commonly its position.  In these cases, delivery will be by emergency Caesarean Section.

In Second Stage of Labour

When there is delay in the second stage of labour there may be similar problems with the efficiency of the contractions.  It may be that the mother is exhausted and cannot push anymore or has a dense epidural block and has no feeling to push.  It could also be that the baby is a little bit big or in a bad position.  Once again an Obstetrician will be called and the mother and baby’s condition carefully assessed.  Most commonly delivery will be successful with assistance using forceps or Ventouse.

This is a potentially serious emergency that can occasionally occur during the delivery of a baby. Normally the widest part of the baby is the head but sometimes it may be the shoulders!  If this is the case then occasionally the shoulders may get stuck in the birth canal preventing the complete delivery of the baby.  It is more common with large babies and when labour has been slow and difficult.  However, it often occurs out of the blue and may be quite unpredictable.

It is however easily recognised by the midwife when the baby’s head fails to turn in the normal way after the head is delivered. Once detected it is usually a full-scale emergency and quite a few staff will arrive in your room immediately.  There is a well-recognised treatment regime which may involve manipulating your legs, pushing on your tummy or internal manoeuvres to deliver the baby before it gets short of oxygen.  Every Obstetric unit, midwife and doctor should be up to date with this emergency procedure.  Usually the baby is born in reasonable condition with no long-term consequences.  Occasionally there may be damage to the nerves in the neck or bones in the neck or arm and occasionally some shortage of oxygen if baby not delivered in 5 minutes or so.

It is normal for there to be some significant blood loss associated with childbirth.  Up to 600ml is considered normal.  When it is above that it is called a Post Partum Haemorrhage and it is likely that you will need some emergency treatment to control and treat this.  The most common cause is of this is that the uterus does not contract well after delivery.  This cause is dramatically reduced by the routine use of injection you will be offered to help deliver your placenta.  Quite simply, this injection reduces your risk of haemorrhage from 15% to 5% and it is very safe (providing you don’t have raised blood pressure which your midwife or doctor will check).

The other causes of bleeding are due to trauma or tears in the vagina or perineum, incomplete separation and delivery of placenta and more rarely clotting problems.  Once again, heavy bleeding is treated as an emergency, and lots of help will arrive very quickly.  Drugs will be given to make the uterus contract, fluids will be given intravenously and any tears will be repaired as soon as possible.  Occasionally a manual removal of the placenta is required.

Most women can withstand the loss of a litre of blood without feeling unwell but if blood loss is more than that it is quite possible you will need a blood transfusion and occasionally some treatment for clotting problems.  If bleeding persists, there are several other techniques that can be used to make the uterus contract and reduce blood loss.

Approximately 1 in 4 breech babies are not discovered until labour.  This may be a big surprise to the mother and the midwife.  Diagnosis may be suspected by feeling the baby’s bottom rather than head and this is usually confirmed by a scan in labour.  Once diagnosed, this usually results in an emergency Caesarean Section which may be a bit traumatic for someone in advanced labour and expecting a normal vaginal delivery.

Occasionally diagnosis may be made in second stage of labour when the woman has already started pushing.  If this is the case, it is usually safe to proceed with an assisted breech delivery by an obstetrician.  The fact that the neck of womb is fully open and the bottom is so low down suggests that a vaginal delivery is likely to be uncomplicated.

So what happens AFTER you have given birth?